Asbestos victims and unions fear a government promise to fix regulations so that victims can pursue compensation may be nothing more than hot air.

For many victims these regulations are literally their last gasp attempt to seek legal just for their injuries.

The long awaited state Asbestos Safety Action Plan has been welcomed by SA Unions as an important tool in fighting the rising incidence of asbestos related disease.

South Australia now has the world’s highest per capita incidence of mesothelioma. The action plan is one step towards building awareness and reducing the number of new victims of this lethal substance.

The SA Asbestos Coalition was formed in 2005. it is a coalition of groups and individuals who are committed to continued campaigning and advocacy in the area of asbestos and asbestos related disease in South Australia.

Many organisations are doing excellent work in our state in the area of asbestos but in the past we rarely got together or worked together.

We agreed it would be more effective if we could share our expertise and support each other in this important public issue.

The Coalition meets monthly to hear information on specific areas of expertise, share information, identify issues and support each other.

If you would like to join the coalition or find out some more information contact SA Unions on 8279 2222 or email saunions@saunions.org.au

The valiant struggle of four impressive asbestos victims campaigners was remembered in the planting of a tree for each at Jack Watkins park on Asbestos Awareness Day 2008.

If you think you have come in contact with Asbestos contact SA Unions on 8279 2222 or email : saunions@saunions.org.au to obtain an Asbestos Register Form to have your details recorded.

The Jack Watkins Park in Kilburn was completed and opened earlier this year on the cleaned up site of the old Islington Railway Yards. The project was initiated by the local Council and now provides a great resource for the community in Kilburn.

This site is well known as a place where a large number of workers died of asbestos related disease as a result of the work they were performing. One of the worst jobs resulting in this large number of deaths was the removal of friable asbestos from railway carriages. This put the workers in direct contact with the material. It also resulted in wives and children of the workers dying as the workers carried the dust home on their clothes. Asbestos dust also blew around the area into people’s yards and homes. 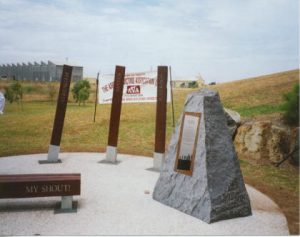 Over the last 100 years a conservative estimate would put the number of workers who died at around 400, although many of those who died in the 30’s and 40’s were diagnosed as having lung cancer and other diseases because of the lack of awareness of asbestos and its dangers. The number of community members who also died is difficult to measure but whole families have died of asbestos related disease in this area.

This is why it is both a community and a union issue and has led to the collaboration of the City of Port Adelaide Enfield with the SA Unions to develop a memorial for the victims of asbestos on this site. It is apt that it is placed in the Jack Watkins Park as Jack has been a tireless campaigner for the removal of asbestos over many years.

The memorial was initiated and funded by the SA Unions, the City of Port Adelaide Enfield and the funding was also sought and given by the State Government, WorkCover, unions, law firms and businesses. All the names of the generous supporters are included as part of the memorial.

The generous support has enabled this memorial to be creative, innovative and beautiful.
Asbestos Facts

It is estimated that 54,000 Australians will be affected by an asbestos-related illness by 2020.

It is estimated that 18,000 of those will die from an asbestos-related cancer.

South Australia has the second highest per capita incidence of asbestos related disease in the nation. For every mesothelioma sufferer, another 2 people develop asbestos related lung cancer.